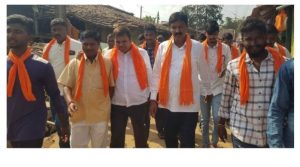 Belgaum News: Politicians have started preparations on war level to capture the constituency from the point of view of assembly elections and MLA Ramesh Jarkiholi has camped in Belgaum rural constituency to fight the opposition. Ramesh Jarkiholi has emphasized on party organization to defeat the political enemies of rural constituencies in the upcoming assembly elections. Last week, it was indicated that he was active by meeting the Chief Minister  and Nagesh Mannolkar, President of Hindalga Gram Panchayat.

Emphasis has been placed on the party organization by visiting more than ten villages including Hirebagewadi, Halga, KK Kopp, Badal Ankalgi in the rural constituency. The political conflict between Belgaum Rural Constituency MLA and Ramesh Jarkiholi is nothing new. We have an example of Ramesh Jarkiholi overthrowing the government due to political hatred in the previous election.

Now once again the wind of election has started blowing and in the background of the election, the movements in the politics of Belgaum have become dynamic. Moreover, MLA Ramesh Jarkiholi is determined to defeat the MLAs of the rural constituency in the upcoming elections.

Last week, Ramesh Jarkiholi has started unity by visiting various villages including Sambara, Modga, Pant Balekundri, Marihal in the eastern region and meeting the local political leaders. There has also been talk of planning a political strategy by meeting the Chief Minister along with Nagesh Mannolkar, president of Hindalaga Gram Panchayat.

The much-awaited Kannada film ‘Kabja’ will hit the silver screen on March 17.

Belgaum railway station will be redeveloped